By NATE CHINEN
Published: January 12, 2011
See the article on The New York Times website.
View an image of the article. 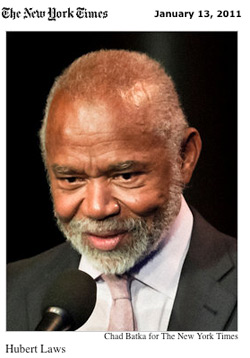 Accepting his 2011 NEA Jazz Masters award at the Rose Theater on Tuesday night, the pianist Ellis Marsalis noted the privilege of standing alongside his fellow honorees, both “past and passed on.” He paused to reflect on those who died last year — the pianists Hank Jones and Billy Taylor, the singer Abbey Lincoln and the saxophonist James Moody — before joining four of his sons, all accomplished musicians, for a brightly buoyant finale. That transition put an emphasis on continuity, the passing of information from one generation to the next. It was a genuine jazz moment, and fittingly so in an evening full of them.

Jazz is a living art, its lexicon in a perpetual state of renewal. But it also has a clear, strong center, as an art form and as a set of practices. That’s one reason for the aftershocks that inevitably follow the loss of an important jazz elder. And it’s one more reason for the continuing cultural value of the NEA Jazz Masters awards, which have been bestowed each year since 1982 by the National Endowment for the Arts.

Along with Mr. Marsalis, this year’s class includes the record producer Orrin Keepnews, the flutist Hubert Laws, the saxophonist and flutist David Liebman and the composer-arranger Johnny Mandel. (It also includes Mr. Marsalis’s sons, but we’ll get to them.) Each award came with $25,000. And the ceremony and concert, presented in conjunction with Jazz at Lincoln Center and viewable at the Web site ustream.tv, gave each honoree a warm bask in the spotlight, with many previously inducted Jazz Masters looking on, and some of them giving the introductions.

Despite the long-windedness of a few of those introductions — here’s looking at you, Benny Golson, Jazz Masters Class of 1996 — the evening moved quickly, better paced than in previous years. The Jazz at Lincoln Center Orchestra played crisp arrangements of some pertinent themes: “Re: Person I Knew,” written for Mr. Keepnews by the pianist Bill Evans (the title is an anagram of his name), and “The Shadow of Your Smile,” among the best-loved songs by Mr. Mandel. The orchestra also played behind Mr. Liebman’s soprano saxophone lead on two Gershwin themes recorded by Miles Davis with Gil Evans: “Summertime” and “There’s a Boat Dat’s Leavin’ Soon for New York.”

And just before Mr. Marsalis took the stage to receive his award, there was a musical nod to last year’s departed Jazz Masters, as the orchestra backed the singer Roberta Gambarini and the saxophonist Jimmy Heath (Class of 2003) on a bittersweet ballad called “Angel Face.” Composed by Jones with lyrics by Lincoln, it’s not a career-defining song for either of them. But its pedigree — it comes from Lincoln and Jones’s duet album, “When There Is Love,” released on Verve in 1994 — sounded the right note about the deep current of camaraderie that jazz still cultivates.

A more musically fulfilling iteration of that message came earlier, as Mr. Laws played a softly rippling version of “Stella by Starlight” with the pianist Kenny Barron (Class of 2010). Adopting a free-flowing cadence at first, they eased brilliantly into the song together, responding to each other’s signals with extraordinary poise. Mr. Laws was captivating, unerring with his intonation and luxurious in his tone.

Rocco Landesman, the chairman of the National Endowment for the Arts, announced early in the program that in addition to the award money, the endowment was distributing $250,000 in grants to 15 nonprofit arts organizations across the country, to present NEA Jazz Masters in performance or educational settings. (The Charlie Parker Jazz Festival and the 92nd Street Y are the two New York City recipients of this financing.)

At the end of the night, Mr. Landesman also felt the need to point out something that had been deftly underplayed: Mr. Marsalis’s award was actually dedicated to “The Marsalis Family,” including his sons Branford, a saxophonist; Wynton, a trumpeter (and artistic director of Jazz at Lincoln Center); Delfeayo, a trombonist; and Jason, a drummer. Because it’s the first group award in NEA Jazz Masters history, that decision has met with some pointed criticism. The criticism stands, but so does the decision. And given the evening’s unspoken focus on legacy, it didn’t seem out of place here.

A version of this review appeared in print on January 13, 2011, on page C6 of the New York edition.