Original article can be viewed here. 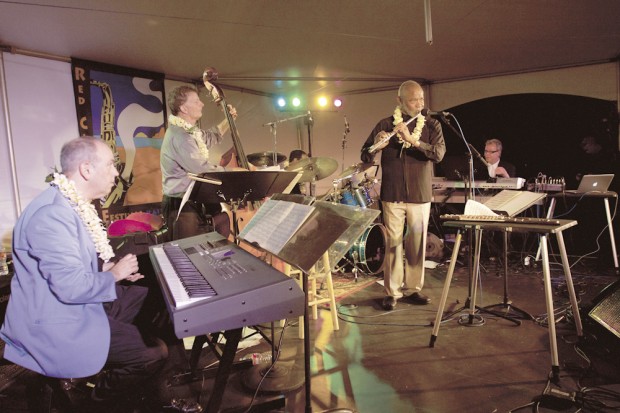 Relaxing in the “green room” tent behind the outdoor stage constructed at the Marriott Kaua‘i Lagoons Golf Club, Laws reflected on his life and work. “Music is just one of the facets of my life,” he said, “and I like to talk about the art of music in relation to other people.”

Laws’ voice is gentle and his tone direct. His eye contact is clear and calm. “I love music,” he said, “and, like anyone else, I want to be comfortable, but what’s more important is my connection with people. To me, people rate as much more important than things, and I try to keep my perspective on that.”

At that moment, pianist David Budway walked into the tent, and Laws paused to speak with him. “I was looking at you, Dave, as you played that solo on ‘The Rite of Spring,’” and I said to myself, ‘Man, this is just a wonderful thing.’ Every time we play it, you just come up with more inventions. You make it new.”

Budway thanked him and moved away to pack his things. Laws returned his focus to the interview. “When we’re on stage,” he explained, “we play some of the same pieces each time, but they always turn out different.”

Is this why his jazz quintet can be so tight one moment, showing their decades of playing together, and then the next minute cut loose with surprising improvisations?

“The caliber of musicians contributes to that synchronicity,” Laws replied. “And the creativity they all contribute makes it all sound new, gives it a special character. That’s great for me because I took all that stuff for granted for a long time until recent years, when I said, ‘My God, look at what’s going on!”

Laws took a sip of bottled water and stretched his lean frame. “I’ve played with great symphony orchestras, and I’ve played some of the great classical works,” he said. “I used to work so much on classical concerti and sonatas and such — doing difficult things on my instrument. Then I said to myself, ‘Wait a second! There’s something else here I need to spend more time on.

“I’ve been improvising ever since I can remember, but you just take some things for granted that are close to you. The more I started to have experiences like playing gigs with Chick

[Corea] and Herbie [Hancock], the more I saw that these guys are marvelous improvisers, like the guys in my band, and it just inspires me to want to advance in that improvisation area even more.”

Laws uncrossed his legs and leaned forward. “That’s why I say in recent years I’ve been spending more time on improvisation. It’s marvelous; there are so many classical players that covet this ability. They want to do it. They come to me and say, ‘Teach me how to improvise.’ So, I have a newfound appreciation for something that’s natural to me. I just need to enhance it.”

The 71 year-old musician said he started improvising when he was six years old in his home town of Houston, Texas, long before he first played with the Jazz Crusaders at age 15, well before he played with the artists who later formed the Modern Jazz Sextet.

He subsequently studied at Juilliard, joined the New York Metropolitan Opera Orchestra and played with the New York Philharmonic Orchestra before he released his first album, The Laws of Jazz, in 1964.

Apart from an almost 10-year sabbatical in the 1980s to be “hands-on with with my two kids in their formative years,” Laws has never stopped playing and recording. In fact, he said, his quintet will soon enter his Los Angeles studio to re-record his 1970s signature piece, “The Rite of Spring” by Igor Stravinsky.

“We’ve modified ‘The Rite of Spring’ quite a bit since we’ve been playing it live,” Laws said. “So, we plan on recording it again the way we actually play it now.”

The members of his quintet — David Budway, piano; Ralph Penland, drums; John Leftwich, bass; Rob Mullins, keyboards — each has a lively careers of his own, yet the quintet still comes together for special concerts, such as a recent performance in Cape Town, South Africa.

Although he has performed elsewhere in Hawai‘i, Laws said his quintet’s appearance at the Red Clay Jazz Festival was his first visit to Kaua‘i.

“I did not get a chance to see all of the landscape,” Laws said, “but what I’ve seen is very impressive. We have a condo here at the Lagoons that looks out on the ocean, and you can see the mountains. Very nice.”

Laws said he loves how his career has allowed him to travel, especially since his health is good. “I’d say its from treating my body well — not getting involved with drugs and not drinking a whole lot. I don’t have any spare parts, so I want to make sure I keep what I’ve got as healthy as I possibly can.”

The other factor is his spirituality. “That’s what the music is all about,” Laws said. “It’s a spiritual venture. And the main thing here is continuing to develop my creativity. Improvising, advancing in improvisation, matters to me. The more I do it, the better I’m becoming at it, even now.”

Copyright 2011 The Garden Island. All rights reserved. This material may not be published, broadcast, rewritten or redistributed.